The C-Game has the ambitious goal of presenting the target group of pupils aged 12 to 14 in an attractive way with:

and for all of these occupations:

The game can be played both in an individual mode and under the guidance of a career or educational counsellor, teacher or parent (we call this group of persons “facilitators”) who can accompany the student, help or assign the student to achieve various tasks. Simplified in-game registration is required to track a player’s progress.

For proper run of the C-Game piloting, please, be so kind and follow the recommended instructions of the three following sections:

The C-Game story and mode of play

The player becomes the mayor of the city. Chooses the name of the city, decides on its development, influences the institutions and companies that will operate in the city, as well as the number of inhabitants and their satisfaction.

In the first game level it is possible to build 24 buildings situated on a map. The map is larger than the regular monitor screen and can be moved in the same way as other maps (press and hold left mouse button).

The building can be built by pressing the “Build now” button and in the first level also answering two questions. Here, please, remind pupils to answer HONESTLY and that the answer does not affect whether the building is built or not. These questions are used to determine the professional orientation of the student using Holland’s typology of professional interests RIASEC, which is built into the game.

After clicking on a built building, a card of the building will open with information about the building and an overview of the job positions that have been assigned to the building. At the beginning, all working positions are vacant and intended to be filled. It is up to the player which occupation decides to occupy and when will do it.

After clicking on “About” placed near the occupation title opens a occupation´s card, which contains basic information about the occupation, a demonstration of five work activities, minimal education level usually required by employers, a sample of several work subjects and examples of personality requirements and skills. Please advise students to read this information.

With the “Back to the building” button, the player returns from the occupation card to the building´s card, where can start filling vacancies with the “Occupy” button. Filling a vacancy is done through conversation with a virtual Job Portal, which asks questions, comments on answers and encourages players to take further steps. Several questions have to be answered to fill the vacancy.

After the construction of individual building, the number of inhabitants automatically increases, as well as after filling the job position.

In each building, selected vacancies are marked with a key. After occupying the last one, the player has the option to occupy all the remaining ones with one click.

Population growth is not in itself the ultimate goal of the game. On the left side of the city screen, there are 8 circles with pictograms – 8 indicators of the city’s functionality, i.e. economic sectors like health care, administrative services, education, transport, etc. After placing the cursor on the individual indicator, you will see to what extent the given indicator is filled with built buildings and vacancies. If you click on any of the 8 indicators, a list of buildings that have been included in the given level of the game will open. In addition, there is a symbol in the city behind the name of each building corresponding to one of the 8 indicators.

On the scale marked with a smile, there is a summary indicator based on the values ​​of the above-mentioned 8 indicators of the city’s economic sectors. It expresses the overall satisfaction of the inhabitants of the city. Its value is given as a percentage.

Another scale marked with a red and white target shows the success of filling vacancies. For every 5 consecutive correctly filled in ads, a certain bonus is obtained.

The numerical value near the diamond are the points obtained for completed missions. Access to missions will open to the player only after filling a certain number of vacancies.

At the very top right corner, by clicking on the blue button with 3 horizontal stripes, opens the “Dashboard”. The Dashboard summarises game results, for example, reached city population, their satisfaction, goals achieved and the RIASEC profile obtained from quiz in the 1st game level.

Go back to C-Game piloting 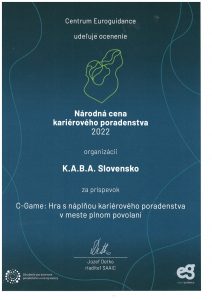 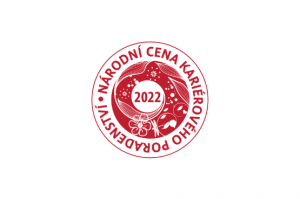